Funnybooks with Aron and Paulie: Batman The Drowned!

This week we spend some time talking about whale poop and Paul’s package.  Also, Aron finally saw Spider-Man Homecoming.  Plus we chat .about the upcoming Punisher series on Netflix and Marvel’s announcement about their own convention.  Also, the week’s comics: 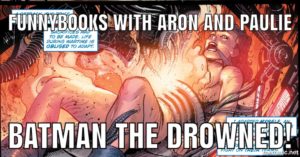