It’s been quite a while since I’ve written a blog posting, but the newest episode of television’s Star Wars Rebels, “Twin Suns,” really left me with more thoughts than really could be shared on Twitter.

The episode seems to have been a pretty divisive episode, if social media is any indication. Spoiler warnings on, so click on for more….

Ever since Darth Maul was hinted at in The Clone Wars, fans have been waiting for the inevitable confrontation with Obi-Wan. Sure, he battled him a number of times in that series, but his story was never fully resolved when they pulled the plug on the show and, when he appeared in Season 2 of Rebels, fans, including myself, were wondering if we’d finally see that “final battle.”

“Twin Suns” brought us that final battle, but not until finding a way to shoehorn Ezra Bridger into the episode. While I appreciate that the series is about the titular rebels, and every episode has focused on at least one of them, Ezra’s inclusion in the episode felt forced. Maul has proven himself a strong enough character to support an episode on his own and, ultimately, it felt to me that this episode was a step back for Ezra. 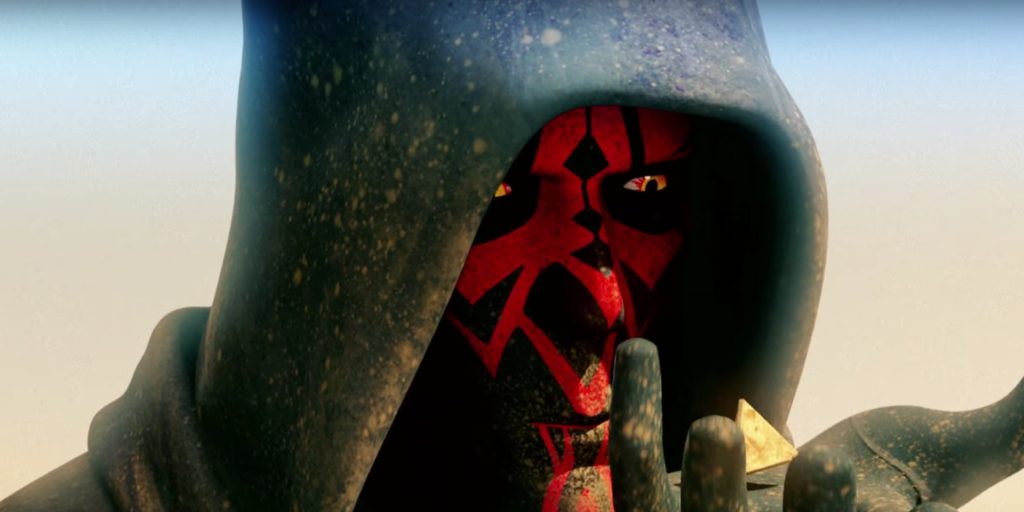 Maul uses the holocrons to lure Ezra to Tatooine in hopes of using him to find Obi-Wan. Obviously, it works and we get the long awaiting final duel between the two. Unfortunately, for Ezra to really be included in the episode, he had to defy Hera again (like we haven’t seen that done a dozen times at this point), just to be dismissed by Obi-Wan (and actually respect that) right before the final duel. While future episodes may show what Ezra gained from his experiences here, I’m not entirely sure how. Ultimately, he felt shoehorned in, nothing more than bait to lure Kenobi out.

As for the final battle, I’m torn. Ultimately about ten seconds long, Maul tries to take out Obi-Wan using the same move that he used to kill Qui-Gon Jinn, but Kenobi is ready for it and in two blocks and one swipe, Maul is taken out. They looked at each other for longer than the battle lasted. As Maul dies, he asks Kenobi if he is on Tatooine protecting “The Chosen One,” and Obi-Wan confirms. Maul’s last words are, “he will avenge us.”

While the conversations before and after the battle, as well as the actual death of Maul, are told poetically, the battle itself felt anti
climactic to me. I get it – the years have changed Obi-Wan, and Maul ultimately had not changed. Blinded by anger, Obi-Wan was able to quickly take him out, because he’s just that good. I get it, and in fact, that’s confirmed in this interview with Dave Filoni on io9.

“It was a much-discussed thing on how that was gonna go down. The instinct would be, and probably, I admit, the expectation, is for some kind of prolonged lightsaber battle. But I’ve done a lot of prolonged lightsaber battles over the years and I think what’s most important about any kind of confrontation is what’s riding on it. What’s the tension going into it? It starts to matter less and less how you swing a sword or how creatively you do it if there’s not a lot riding on it.”

And on one hand, I appreciate that. On the other, I felt it was unearned. The last time we saw these two battle, Maul was a formidable enough force for Kenobi and Anakin Skywalker. As far as I know, Marvel Comics notwithstanding, Kenobi has been on Tatooine living a relatively quiet existence keeping an eye on Luke Skywalker. While the years make him wise, have they really made him so good he can take out Maul in one swipe? Meanwhile, Maul was more than enough for the two leading Jedi in Rebels in last season’s finale. Are those two Jedi that unskilled? Keep in mind that this is just a few years before Obi-Wan is killed by Darth Vader, and it seems like Maul was just dispatched a little too easily, considering he certainly wasn’t at the top of his game (and said so) in A New Hope.

Again, that’s not to say I don’t appreciate the direction – I get what they were going for, I just didn’t necessarily care for it. The final scene of the episode, Obi-Wan watching Luke from afar as Aunt Beru calls for him, is enough to make any Star Wars fan well up with tears. It was beautifully told, as were Maul’s final moments where it’s shown he really hasn’t grown.

That Ezra walks away from the battle (when he’s proven himself incapable of before), and shows up back at Rebel base without really informing anyone of what happened (we may see this happen next week) makes his inclusion in the episode all the more unnecessary.

I love Star Wars Rebels, and, more than anything, I’ve loved how Dave Filoni and company have brought so much more to Maul’s character than was ever in the one movie he was in, making him amongst my favorite Star Wars characters. I just feel like he deserved more.

What do you guys think? Did you enjoy the way the final battle played out? Talkback below or hit me up on Twitter @IoMPaul.