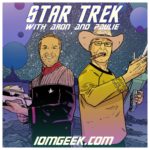 If you were going to make a film about how Aron and Paul met,  set in the late 22nd Century and change their genders, then the Short Trek RUNAWAY would be that show!  Recorded during their lunch break, Aron and Paul discuss the new thing from CBS All Access and Star Tre: Discovery.