Welcome to 2019! Sure, it’s still nine months away, but is it ever really too early to start talking about this year’s upcoming Halloween festivities? I think not! The 29thannual Halloween Horror Nights begins this September, and we figure we should start our new year off on the right foot by talking about first news and rumors related to the event….

First, the OFFICIAL news. As announced in this video, HHN29 will start earlier than ever and feature more dates than ever in 2019. This was expected when Universal Orlando Resort changed the dates for their annual Rock the Universeevent, but having it confirmed has fans excited that HHN29 will run select nights from September 6 – November 2, 2019.  The earlier start should be interesting, as Walt Disney World begins their annual Halloween event in August, so come early September, you’ll already begin to get your full Halloween fix out there in the Orlando area.

Now, the RUMORS. Will no official announcement or even evidence, I think it’s a safe bet to say that, barring contract negotiations, Netflix’s Stranger Things will return to HHN29. The house brought in record crowds and sold out event nights last year, and continued to be a hit when Universal Orlando re-opened the house on Stranger Things Day, November 6. We loved the Stranger Things house, and thought it was a perfect experience for fans of the show, and with season three just announced to premiere this July,  we’d welcome the return to Hawkins, Indiana.

Also on the RUMOR front, we’ve got the below picture. Mysteriously, for the final event night of HHN28, in the Carnival Graveyard house, the movie theater style ticket booth featured a marquee with the words “I’m Back.” While fans expected to see a scareactor in the booth, most reported just the sign addition, rather than any actual character appearing there.

However, the ticket booth brings to mind a potential return of the HHN icon The Usher, created for HHN19. Given it would be his 10thanniversary, could we see a return of the popular icon, last seen in the Icons scarezone at HHN25? 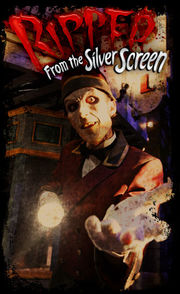 Longtime fans of HHN may remember HHN19, which also, in its final weekend, featured the Shadows of the Past scarezone as a “preview” for HHN20, and showcased all of the previous event icons. Could we see another similar return as a preview for the big 30thanniversary in 2020?

As always, subscribe to our YouTube channel, or keep it tuned to IoMGeek.com, as we’ll continue to showcase all the news and rumors of the event leading up to our annual coverage.