Star Wars Celebration Chicago will take place April 11-15 at McCormick Place, and IoMGeek will be there covering it and sharing our experience with you! This will be our third time attending Celebration (check out our previous experience below), and we are excited about the changes, new location, and panel schedule! 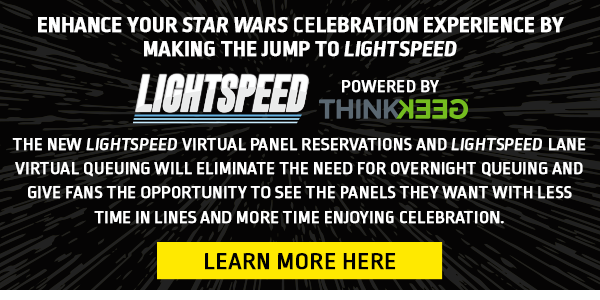 This year, Star Wars Celebration is introducing new LIGHTSPEED Virtual Panel Reservations to reserve admission to panels for guests and any additional tickets they purchased on their original order. The new process includes a lottery for all morning panels on the Celebration Stage, as well as the Galaxy and Twin Sun stages, where they will be streaming the morning panels live from the Celebration Stage. You’ll also be able to make panel reservations for panels on the Galaxy and Twin Suns Stages.

The LIGHTSPEED Virtual Panel Reservations does seem to eliminate the need to camp out overnight. If you win a lottery for admission to the first panels each morning on the Celebration Stage, you’ll know what seating section you’re assigned to in advance, which reduces the need to queue up early. When you win the lottery, you’ll receive specific instructions and arrival times. In exchange of overnight camping, Celebration is offering evening events such as the Multi-Fan Club Bash, Second City’s Rogue Pun: A Star Wars Show, evening movie screenings, a special game with the Chicago Cubs, and more.

Not able to get in through the lottery? There will be an allocation of seating capacity for other panels at the Galaxy and Twin Suns Stages for fans to reserve admission in advance without a lottery. And there will be opportunities for fans to walk up and enter a panel without an advance panel reservation by waiting in queues located at each stage in the West Building.

All panels taking place on the Podcast Stage, University Stage, Collectors Stage, Fan Stage and The Star Wars Show Live! Stage are open to all fans and do not require a lottery win or advance panel reservations.

Important to note: the Celebration Stage at the Wintrust Arena will not be cleared between panels. Fans are free to stay in their seats all day or move to new seats as other fans depart after the first panel of the day has ended. After the morning panels, fans will be able to enter the Celebration stage as they wish, at any time, to watch any subsequent panels so long as the stage has not reached capacity.

You can make your reservations on the mobile app and onsite kiosks the day of the show for any remaining reservations that are available on the Galaxy and Twin Suns Stages until 15 minutes prior to the panel start time.

The lotteries for all morning panels on the Celebration Stage and the streaming of those panels to the Galaxy and Twin Suns Stages will open on Thursday, March 28, and close at midnight on Wednesday, April 3. 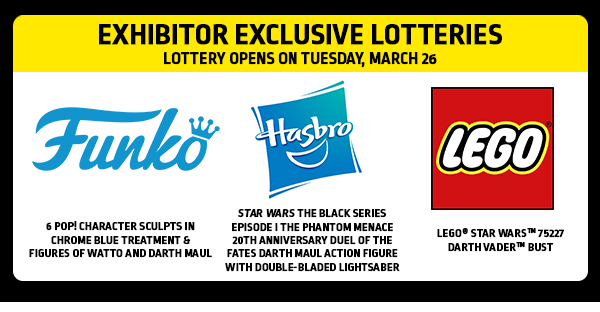 Speaking of merchandise, Funko, Hasbro and Lego will, much like in prior years, be utilizing an advance lottery to purchase exclusive items from their booth. You’ll be able to enter the lotteries for the exhibitor exclusives through the official Star Wars Celebration mobile app (coming soon!) and Celebration website.

LEGO will have a special brick bust of Darth Vader, which will be a shared exclusive with Target stores.

Hasbro will celebrate the anniversary of Episode I: The Phantom Menace with a pair of 6-inch Black Series figures on nostalgic Episode I cardbacks, featuring Darth Maul and Obi-Wan Kenobi.

Of course many other exhibitors will be featuring exclusives. Make sure to check out your favorite exhibitor on social media to see what giveaways or exclusives they may be featuring! Note that many exclusives, especially the free ones, will go quickly.

The Star Wars Celebration Store will feature a slew of exclusive merchandise, including Loth-Wolf plushes, mugs, a Phantom Menace jacket, and a Rancor tiki mug by Geeky Tiki. 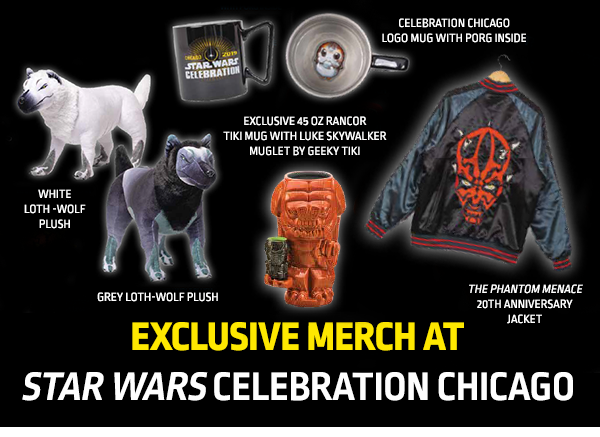 Fantasy Flight Games will be featuring a limited edition Darth Vader Commander Expansion for their popular Star Wars Legion, which contains a limited edition resin miniature. They’ll also be featuring an exclusive art print, signed by artist Darren Tan. If you’re a Fantasy Flight Games fan, be sure to hit their panel on Saturday at 11am on the Twin Suns Stage, as well as painting panels and tutorials throughout the weekend. For more information, check out fantasyflightgames.com.

Hallmark will be returning with exclusives such as an amazing C-3PO and R2-D2 concept art ornament set, salt and pepper shakers, and more.

Our favorites Kotobukiya will be selling R2-R2 and R2-B1 ARTFX+ statues 2-pack and a Bronze Darth Vader statue!

Oddly, one of the items I’m most interested in is from Wilson, who will have a Star Wars: The Phantom Menace 20th anniversary football featuring Darth Maul!

Tons of guests have been announced from across all areas of Star Wars media, including Alan Tudyk, Billy Dee Williams, Jason Isaacs, Ashley Eckstein, and more! For the full list, check out the official site!

Star Wars Episode IX (Friday, April 12 at 11 a.m., live on the Celebration Stage and presented simultaneously at the Galaxy and Twin Suns Stages): expect to see our first look and a reveal of the name of Episode IX here!

Vader Immortal (Friday, April 12, at 1:30 p.m., Celebration Stage): a first glimpse at Vader Immortal: A Star Wars VR Series, the new ILMxLAB virtual reality experience, featuring members of the creative team. Following the panel, ILMxLAB and Oculus will open a booth on the show floor, with an exclusive, interactive preview of Vader Immortal – Episode I, which will run throughout the remainder of Celebration.

Bringing Star Wars: Galaxy’s Edge to Life (Saturday, April 13, at 11 a.m., live on the Celebration Stage and presented simultaneously at the Galaxy and Twin Suns Stages): team members from Walt Disney Imagineering and Lucasfilm will share stories about what it takes to bring Star Wars to life and how visitors can live their very own Star Wars stories

Star Wars: Jedi Fallen Order (Saturday, April 13, at 1:30 p.m., live on the Celebration Stage): The reveal of EA and Respawn’s new Star Wars Jedi: Fallen Order, in which gamers will meet a Padawan who survived Order 66 and explore the galaxy in the time after the fall of the Jedi Order. The discussion will feature never-before-released details ahead of the game’s fall 2019 release.

Star Wars: The Phantom Menace Anniversary Panel (Monday, April 15, at 11 a.m., live on the Celebration Stage and presented simultaneously at the Galaxy and Twin Suns Stages): Featuring guests from Episode I

The full panel schedule has been released at the SWCC official site here.

The map of the convention center has been revealed, including the show floor itself! Click to enlarge.

For more information, visit StarWarsCelebration.com. There are still tickets available for Monday, as well as through the official reseller of SWCC, Lyte.