Universal Orlando Resort’s Halloween Horror Nights returns from Sept. 6 – Nov. 2, 2019 with ten haunted houses, five scare zones, two outrageous shows, and more. Here’s our guide to all the houses and details to get you ready for the big event.

The Ghostbustersused to be presence at Universal Studios, but this is the first time that they’ve been granted a full, dedicated haunted house. As a fan of the franchise, I’m super excited for this house – sure, a lot of fans are concerned that Ghostbustersisn’t “scary,” but given last year’s Poltergeistand Stranger Thingswere based on properties just as “unscary” as Ghostbustersand produced amazing houses, I have a lot of faith that the creative team will find a way to bring the scares and fun, while also having a lot of fan service. Hype Score – 5/5

Usis an interesting property to translate to a house. At first glance, the property doesn’t seem like it would be very interesting, given the nature of the “horror movie with a message.” However, with a movie that features a creepy funhouse, multiple scary home invasions, and an underworld inhabited by murderous clones, there is the potential to make Ussomething pretty scary. Hype Score – 3/5

Rob Zombie’s first major motion picture is finally getting its own haunted house at Halloween Horror Nights in Orlando. Sure, Rob Zombie has not only been featured at HHN previously, but also has done his own haunt event, but with 3 From Hellcoming out this year, it’s prime time for a House of 1000 Corpseshouse. Great imagery from the movie should lend itself to a fantastic house. Hype Score – 4/5

I know a lot of folks are very excited to see the Killer Klowns from Outer Spacereturn after last year’s fun scarezone, of which I was a fan. However, I’m not too psyched for this house. Admittedly, I’m not a fan of the movie, and I think the Klowns themselves have restrictive costumes that don’t lend well to scares, so this house would likely lean heavily on fun and funny, while using sounds and victims to bring the jumps. Hype Score – 2/5

As a fan of both the show and last year’s Stranger Things house, I’m excited to see the return to this year’s event, especially featuring scenes from both seasons 2 and 3. With demodogs and the StarCourt Mall, I expect the house to really appeal to fans of the show, and with last year’s record breaking crowds, I’m not surprised to see it return. Hype Score – 3/5

Scary or not, the Universal Classic Monstersdeserve a place at Horror Nights, and I am super excited to see them return in one combined house. Universal invented the horror genre with these iconic characters and always tends to do something a little different with them than just representing them in their classic appearances. Hoping for some amazing facades on this one as well. Hype Score – 5/5

Hard to say on Depths of Fear. Seemingly inspired a bit by the Bioshockvideo game, this house could bring some cool visual treats, or it could be a bust. I do think this will be the “wet house” of this year’s event, with dripping water everywhere. What’s going to sell this concept will be amazing creature design and some cool façade work. Hype Score – 1/5

Very excited to see the Nightingalesreturn in Nightingales: Blood Pit. Their original appearance, back in HHN21, was a fantastic house set in World War I trenches. The new house, set during Ancient Rome, should be pretty interesting, with cool costumes and a lot of gore. Hype Score – 3/5

Yeti: Terror of the Yukon

After the fun appearance of last year’s Swamp Yetiin Slaughter Sinema, I think a lot of fans were hoping for a full yeti house, and now we have one! I love a good snowy horror experience, so I’m hoping this bring some good scares, some fun, and some blood-soaked snow. Hype Score – 3/5

Graveyard Games seems like it could be a really fun house, and maybe a dark horse contender for house of the year. With the graveyard theme, lots could be done with themeing and special effects. I like the idea of walking through an elaborate graveyard and the horrors we could see. Hype Score – 4/5

Rob Zombie has created some pretty memorable characters, with the Firefly Clan, Doctor Satan, and of course the amazing imagery from his albums and music videos. Should be pretty cool to see how they translate to an outdoor scarezone. Fans who’ve attended Zombie’s own haunt events in the past may have a good idea of what we’ll see here.

Great timing with the new movie coming out, and I for one am super excited for the film. I’m hoping we’ll see some fun zombie action, along with some characters inspired by the movie.

I like the idea of a Vikings-themed scarezone. Could see some great façade work here, and it would definitely be something different than we’ve seen out of HHN, especially in Central Park.

I admit I have a weakness for plastic surgery gone wrong – it’s a concept that really gets under my screen and creeps me out. In the streets of Hollywood, I can imagine this scarezone will give me the creepy crawlies!

Anarch-Adesounds like a ton of fun. Taking place in the Avenue of the Stars as you enter the park, neon slashers and 80’s inspired arcade creatures? Sign me up!

Academy of Villains return! The awesome dance theatrical group will be returning to the same theater from last year and, though I wasn’t a huge fan of last year’s show, I love Academy of Villains, and am looking forward to their new performance.

Food options are visible on this year’s park map, including highlights like a Starcourt Mall experience near the Zombieland Scarezone (yellow circle), and Twisted Taters, Pizza Fries, and S’mores Fries available at or near KidZone Pizza Company (blue circle).

Merchandise for this year’s event is on sale at shop.universalorlando.com. This year’s merchandise highlights include a strong focus on Stranger Things and Ghostbusterson shirts, posters, mugs, lanyards, and even awesome 80’s style glasses!

One thing to note is that Ghostbusters is not featured on the house shirt this year. 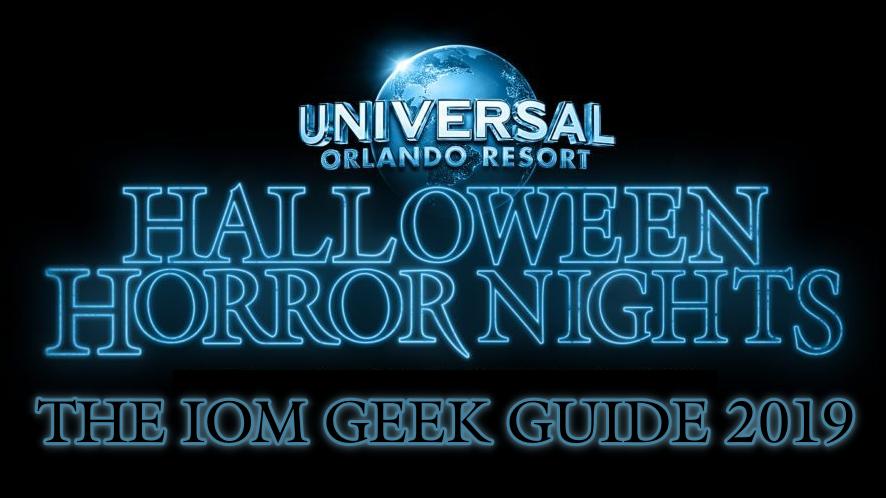 Of course, IoMGeek will be at Halloween Horror Nights this year! Make sure to check out our thoughts, including video and pictures, on our YouTube and on IoMGeek.com. Thanks for watching, and we’ll see you in the fog….