Ten years ago we interviewed Marv Wolfman in a wide-ranging conversation about his Marvel and DC career.  With the CW’s CRISIS episodes airing December and January, we thought it would be fun to dust off this episode in which we discuss his iconic work on CRISIS ON THE INFINITE EARTHS and many other terrific titles.

I feel bad for Paul.  I never let him get a word in edge-wise in our interview with comics legend Marv Wolfman.  I’m a huge fan of Marv’s work.  He was generously indulgent of my near hour long gushing over him.

We discuss his ground breaking work on Tomb of Dracula, the creation of the New Teen Titans with George Perez, and authoring the revolutionary Crisis on the Infinite Earths.  To top it off we chat about lots of the characters he’s created over the years including Blade, Nightwing, Black Cat, Bullseye, and NKVDemon (or maybe he didn’t do that one). 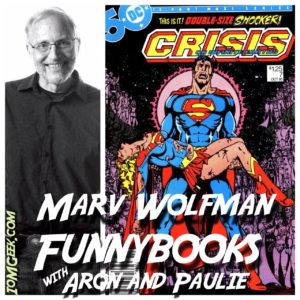