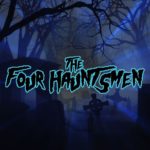 Hot damn! There’s so much awesome in this episode of Four Hauntsmen that it couldn’t be contained to one regular-length episode. In addition to chatting about the recently announced HHN27 houses based on The Horrors of Blumhouse and the original properties, we feature not one, but TWO special guests!

We talk to Sam Fraser, one of the minds behind Beasts of Blackwood, a new immersive haunt experience  in Orlando, Florida. For more information, visit http://makereal.co/

Then, we have an extra length chat with Blake Braswell, show director for Universal Studios Orlando, responsible for the scare zones at this year’s HHN27 event. Tons of new and exclusive info is revealed in this conversation, with some easter eggs you won’t want to miss! For more on everything Blake is involved in, follow him on Twitter @BlakeBraswell, and check out his comic work at BigWonderWorld.com, and his podcast, thebrewtifulgame.com, where he discusses beer and soccer!