Halloween Horror Nights is back at Universal Orlando Resort, select nights from September 6 to November 2, 2019. As always, IoMGeek attended the event, and, with the first weekend over, we wanted to share our thoughts on this year, house rankings, scarezones, shows, and more!

First, check out our photos of the event below (or click here if the gallery doesn’t work in your browser)! 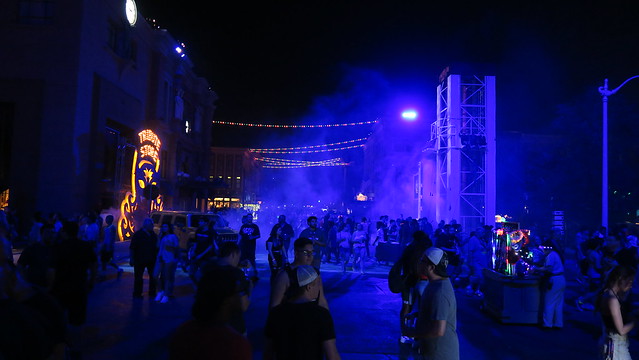 Admittedly, this year is one of the strongest in YEARS for houses. I struggled to choose my top houses and likely, if I were asked again, might even change my order. That’s how uniformly excellent the houses were this year. Here are our house rankings, from least to most favorite.

(note, we hit each house at least twice to form our opinions)

I was skeptical of Depths of Feareven before the event, but I always try to go into each house with an open mind. Sadly, while Depths has amazing design work, the house fell flat to me. I did get the story of it all, and the video intro and audio cues throughout certainly help explain what’s going on, but where this house fell flat for me is in the creature work. I don’t know if the creatures were intentionally designed to be a little hokey, but if they were, the rest of the house didn’t embrace that, so it was an odd mixture of amazing set design and what everyone is dubbing “shrimp people.” I will reiterate the strength of the set design though, as rarely did I find myself remembering I was in a tent – great work there.

I was extremely excited for the return of the Nightingales, but again, the scares weren’t fully captured for me in this house. As with Depths of Fear, the set design is lush in this house – while you don’t ever feel as if you’re in a Roman arena (given the smaller nature of a tent house), you do very much feel as if you’re in the tunnels around it, or below it. The Nightingales seemed to have a redesign that I didn’t love, but I did get more in the way of scares than I did from Depths. In addition, some great costuming on the Roman characters, and tons of gore.

I enjoyed Usas a movie (primarily the first half), and if you’re a fan of the movie, or even familiar with the movie, there’s a lot to like here. The scareactors are perfect in their roles, both looking and acting just like their movie counterparts. A great opening façade has you entering the funhouse from the movie, and the sets throughout certainly have you remembering the movie from beginning to end. If you’re not familiar with the movie, however, not sure there’s much for you here, as it truly is a retelling of what happens. I feel like you’d be a little lost without the knowledge of seeing the film first.

Sleeper of this year, I expected this house to be at the bottom. However fun design work, great use of the space, special effects and CLOWNZILLA all made this house a surprisingly fun walkthrough for me. A lot of work went into recreating imagery and characters from the film – fans of the movie will love this. Even as a non-fan of the original film, I found plenty to enjoy here, and found myself very impressed.

On my first walk through, Stranger Thingswas my favorite house this year. I don’t know if reading other’s throughts on the house changed my opinion or if the additional walkthroughs just changed it, but I do understand the criticism. After last year’s amazing house, this year featured replacing many actors with static mannequins and special effects, which I know bothered some. However, even with that, I found a lot to love in this house. The mind flayer is absolutely breathtaking and the scenes recreated from season three are all excellent. Smells in this house, especially in the Upside Down are strong, to the point where I gagged a little bit.

Lots of great design work went into Universal Monsters, the majority of which you can only see if you do an Unmasking the Horrortour. I loved the new takes on the characters, especially Dracula. While the initial façade isn’t quite as breathtaking as it would be in a larger space, they do a lot with what they have, capturing the gothic nature of the stories. Set transitions are done brilliantly, and I loved seeing characters who don’t always get love in the houses, like the Creature from the Black Lagoon and the Phantom. Also, I was wrong – Depths of Fear wasn’t the wet house, this one was as you begin your walk in the rain into a castle.

Truly a love letter to the classic movie, Ghostbusterscaptures the spirit of the movie while also recreating so many of the scenes we’ve come to treasure. The actors were spot on, the special effects (as I type this, I realize this year’s HHN used a lot more mannequins than I remember in previous years), and the sounds and smells all combine to give you EXACTLY what you’d want in a Ghostbustershouse. Is it scary? Debatable – there are some fun jump scares with Slimer, but in general this is truly a fun way to experience the movie in a live setting, and the set design team should truly be commended for the imaginative way they recreated the movie.

Yeti: Terror of the Yukon

I absolutely loved the Yetihouse this year. I love the snowy landscapes, I love the projections they used to show the Yeti’s attacking their victims, and I loved the Yeti costumes. There’s so much to like about this house, which feels like there is truly a lot of passion behind it. It reminds me of the best of HHN’s original houses, and while there may not be a set piece that takes your breath away (I’m thinking of you, Dead Waters), there are so many Yeti, and so many fun moments through the house, you’re going to want to revisit this one.

Graveyard Gamesis definitely the technical standout of this year’s event. The use of special effects, the wonderful set design, and mostly, a storyline that, if you’re paying attention, has a setup and payoff, all encapsulate why I fell in love with HHN to begin with. It’s hard to pay attention when you’re walking as fast as you can through a house, but I do really suggest going on a quieter night where you can (hopefully) take a moment to appreciate all the work that went into this one, and to get as many of the special effect moments as you can. Also, a house that makes use of the space – look up from time to time and you’ll see some great easter eggs and important story moments.

While those not familiar with the movie may be lost, as a fan of it, I adored every drop of detail in House of 1000 Corpses. Truly captures the essence and feel of the original film perfectly. It feels grimy, it feels dirty, and the intensity ramps up through use of the movie’s soundtrack and expertly cast actors in a way that has this not only a perfect recreation of the movie, but probably this year’s scariest house.

Here are our Scarezone Rankings, from least to most favorite.

Vikings Undeadis an idea that I was originally excited about, but I found the execution a bit lacking. A classic scarezone in terms of the idea that the actors are there to scare you, not so much interact with you, I still didn’t find much to love, except for some awesome gore effects. Theme-wise, the classic pumpkins in the trees were missed, but the replacement skulls and lanterns do have a similar effect, if not quite as iconic.

Anarch-ade sure is a beautiful scarezone, with tons of opportunity for great photos, but the zone feels underutilized. The arcade machine props are fantastic, and the costumes look fantastic at night, it just feels very small, given that it’s the entry point to the park. From the visual standpoint, the lasers and neon certainly set the right mood, so perhaps with more actors and a little bit more oomph, this zone can find its footing.

Vanity Ballwas much better on repeat visits than it was opening night, partly due to a noticeable increase in the number of scareactors in the zone. Though the side stages feel underutilized, there certainly is a lot going on constantlyat the main stage. And while the zone isn’t scary, I’ve noticed that a lot of folks genuinely love and connect with it, so I expect this one to be a fan favorite by end of the season.

Zombieland: Double Tapneeds a bit more in the way of props and actors to fill up the giant New York area, as it currently feels like only half of the zone is really used. However, in that area, there are quite a few fun interactions (which you can see on our videos). Definitely had the best scareactor interactions and a number of little shows throughout the evening, depending on your timing.

And, of course, Rob Zombie: Hellbilly Deluxeis the standout hit for me. As a fan of the album and of Rob Zombie in general. It’s so far and wide the best scarezone this year, and of the last few years. Obviously, without knowledge of the subject matter, YMMV, but I love how perfectly they captured the feeling of the album.

It’s hard to rank this year’s new shows, Academy of Villains: Altered StatesandHalloween Marathon of Mayhem, because they’re both so freakin’ fantastic. AoVmakes up for last year’s not-so-well-received show by pulling out all the stops. This show begs for re-watching, because there’s so much going on at once, you’re bound to see new things the more you go. Halloween Marathon of Mayhemwears its passion on its sleeve. The music, the fountain effects, the scenes chosen to display….this show is one of the best things to ever happen to Halloween Horror Nights.

HHN29 obviously had a couple of growing pains as it relates to a hurricane that hit earlier in the week, but despite those setbacks, this year’s houses are some of the strongest to come to the event in years. Though very few of them have a “wow” factor or giant set piece, they’re almost all expertly constructed with fantastic use of special effects and strong scareacting. While a few of the scarezones appeared to need some time to grow, I’m sure by the end of the event each one will have its dedicated fans. The two new shows are both amazing, and both will want you to come back for more. A great year when the team really could have phoned it in while waiting for HHN30. Great job to all involved!