As a surprise to attendees of the Star Wars Rebel Season 4 panel at Star Wars Celebration Orlando 2017, an episode of Season 4 was shown. While not entirely clarified if this was the first episode of the season (I’ve seen it mentioned elsewhere it is, but haven’t seen that officially anywhere), it was one of the few episodes available in a completed form to show audiences after the amazing trailer shown for what was announced to be the FINAL season of the show. For our thoughts on the panel, check out our video recap:

We won’t delve into major spoilers in this review, but if you want to go in entirely spoiler free, don’t click through to the full review. All I’ll say before is that the episode definitely had a more serious tone than I’m used to seeing from Rebels, which Executive Producer Dave Filoni confirmed by saying the show would go to different places in its final season. BIG things happen in the first part of this two-parter, and it certainly feels like we’re starting to resolve outstanding threads set up in previous seasons. For more click through!

“Hearts of Mandalore, Part 1” continues threads established by what many consider to be among the show’s strongest episodes in season 3, the Mandalore-focused episodes involving Sabine, her family, and the fate of Mandalore. A rescue attempt on Sabine’s father obviously doesn’t go as smoothly as planned, resulting in an episode relatively light on story, but strong on action and spectacle, before ultimately ending on a somber note, with some characters not making it to the end of the series.

Yes, while I won’t spoil it here, characters we’ve seen before don’t make it to the end of the episode and, though they’re killed off screen (Rebels obviously doesn’t go to the darker places we went in Clone Wars), the show has definitely developed in maturity and is willing to go to more serious places in order to resolve these long standing storylines.

As mentioned, the episode being strong on action does lend itself to a solid 20 minutes of almost straight action – the Star Wars equivalent of a train robbery from an old Western. Except this one involves jet packs, lightsabers, and Kanan being badass.

Speaking of Kanan, we’re starting to get more direct acknowledgement of the “relationship” he and Hera have and, though nothing is confirmed, it’s clear there’s something more that will hopefully see resolution. In addition, Ezra makes a comment about being “with Sabine,” that opens an interesting door – it may be just a single joke that goes nowhere, or it may end up being something more when all is said and done. 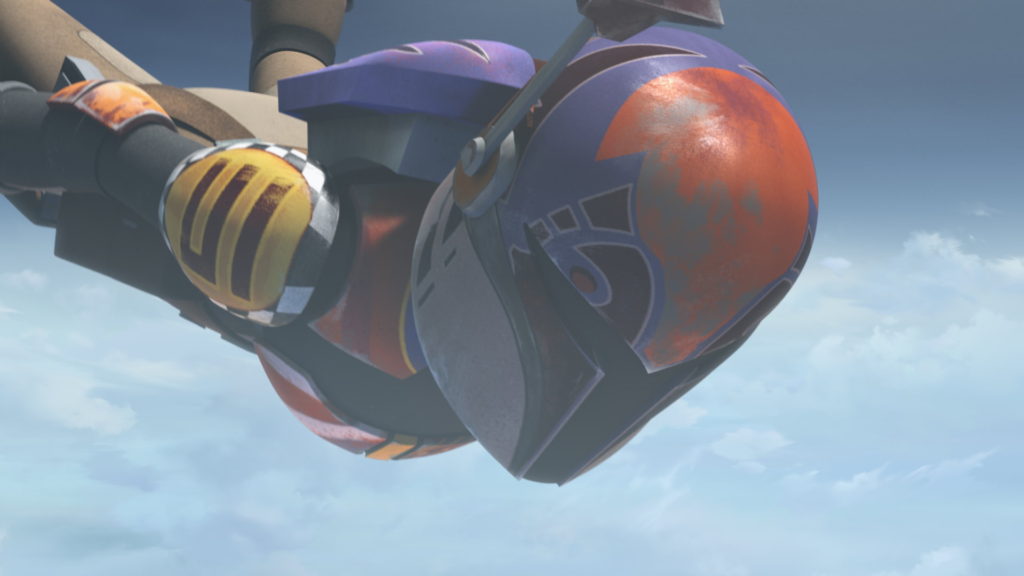 As revealed in the Season 4 trailer, Bo-Katan returns and, though the shot of her with the Darksaber from the Season 4 trailer doesn’t appear in this episode, it does seem like it may be part of this particular series of episodes. Though Filoni confirmed more animated adventures to come after Rebels, the show does seem to be working to resolve threads even established in Clone Wars, including Darth Maul and perhaps even Ahsoka, but this arc looks to ultimately resolve the fate of the Mandalorians as we enter the Original Trilogy.

“Hearts of Mandalore, Part 1” is a strong episode, and I look forward to seeing how it concludes. If this truly is the season opener, then it is establishing a tone of finality for the final season, and ups the stakes in a way we haven’t seen in Star Wars Rebels before.