After months of announcements, fever pitch excitement, and nervousness, Halloween Horror Nights 2017 has arrived, and we were there for opening weekend. As the weeks built up to opening night, there were concerns – would Hurricane Irma affect the event? Would the lack of a definitive icon be a hindrance or a benefit? Having visited the event twice, we wanted to check in with our final thoughts on opening weekend. 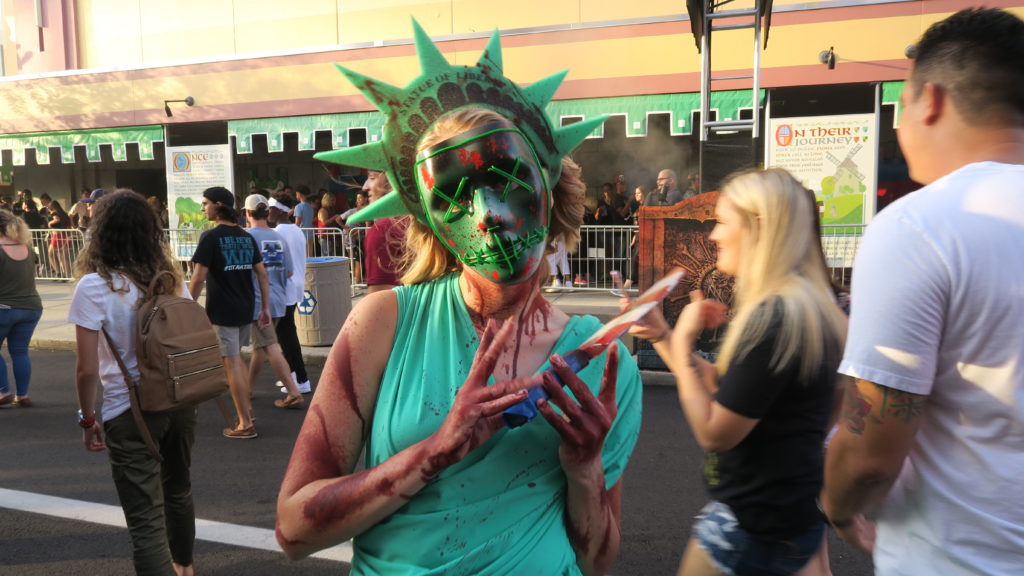 Let’s get our house ranking out of the way right away….

Again, this is only after two visits through most of them (and only one through Saw and Ash vs. Evil Dead), but the top 3 houses were, far and away, for us the best houses of the event. Scarecrow: The Reaping was both beautiful (with a facade that, even with hurricane damage, looked fantastic) and intense. The final room of the house is terrifying, and the scares throughout the house are effective and strong. Dead Waters isn’t the scariest house, but damn if it isn’t one of the most breathtaking houses that Universal Orlando has ever done. While we didn’t get a chance to do the Behind the Screams lights on tour this time, I feel like this specific house would warrant the cost of doing one. It’s breathtaking, and it’ll be heartbreaking that they have to take it down. It felt like you were in a WORLD, instead of a house, and you feel like there’s more to it than you can see … truly great work on this one from all involved. The Shining, a house I wasn’t really excited about, did a fantastic job of recreating the iconic scenes and feel of the movie, while also having great scares and being technically impressive.

As for the rest of the houses – The Fallen is another beautiful house, though a bit lighter on scares. American Horror Story is great for fans of the show, and this year’s megahouse, so it’s definitely lengthy. Ash vs. Evil Dead is a ton of fun, though without a knowledge or appreciation of the show, not entirely sure folks will get the joke. The Horrors of Blumhouse has some great individual moments, but felt very short, and seemed like it would have benefitted from focusing on one property in the small amount of space, rather than three. Hive got better on the second visit, and is definitely better in the second half than the first. Saw is…well, it’s Saw. Quite frankly, I had a hard time remembering much about this house as soon as I’d left it.

Overall, this year’s houses were successful. As with every year, there are a couple of weaker ones in the bunch, and a couple of true standouts. Scarecrow: The Reaping and Dead Waters are early contenders for house of the year, but time will tell if they’ll keep both their intensity and their beauty. I find that the beautiful, but less scary, houses tend to lose their fanbase as the event goes on (see last year’s Ghost Town). Even the “middle of the pack” houses have memorable moments.

This year’s scarezones are where a bit of the effect of Irma can be felt. Festival of the Deadliest, also the theme of the event, saw constant renovation and additions throughout the weekend (and will likely see even more in time for week 2) due to damages to the props in the first weekend. The costuming in this zone was strong, with the unofficial icon, Bones, towering above the other actors with his imposing presence. 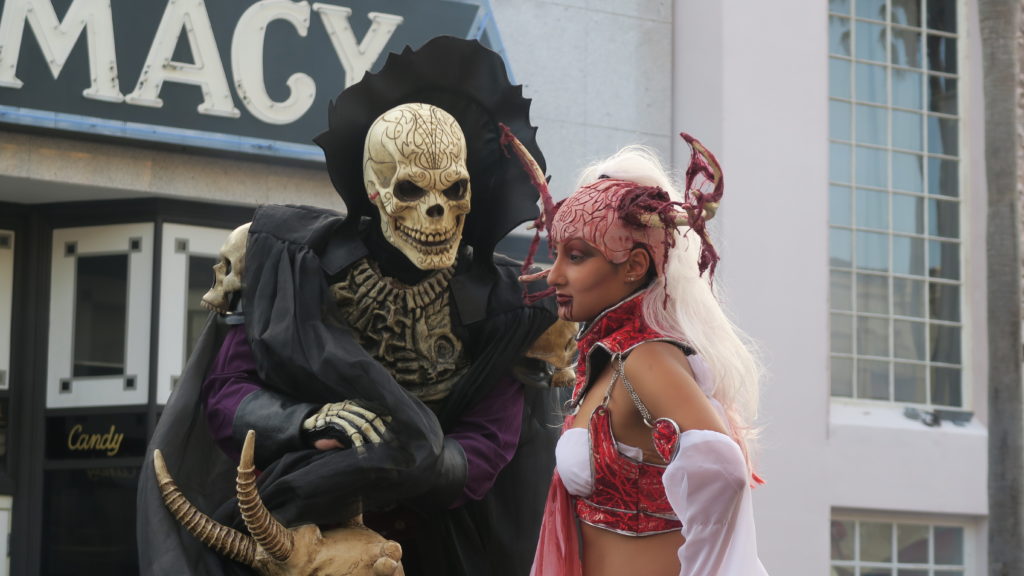 The standout scarezone this year is, not surprisingly, Trick r Treat. Though the Central Park area of the park can be tight, and with the facades (doors representing parts of the movie), even tighter, the actors and the set pieces are fantastic and, more than anything, this zone feels like Halloween. Though the movie is 10 years old at this point, and hardly a relevant property, the feel of this scarezone felt timeless. 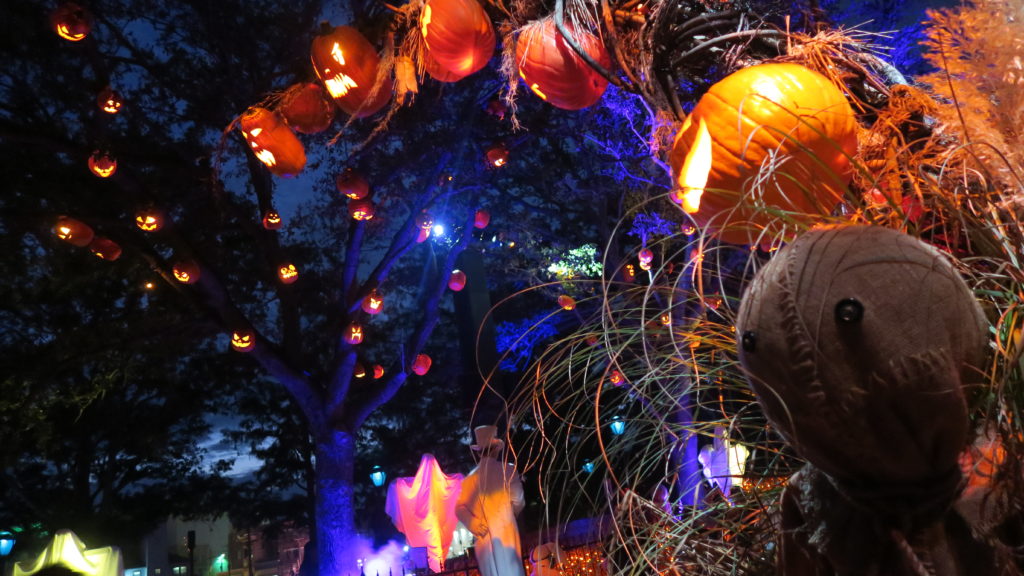 The Purge, a scarezone I was originally not looking forward to, wasn’t too different than the last time we saw it in the streets of New York, but was super effective. Tons of set pieces and things going on, lots to look at, scareactors putting their all into the story. I think every visit to this scarezone will yield different experiences, so it commands repeat visits.

Altars of Horror is, quite frankly, going to hit you differently depending on what you want from it. It’s, essentially, a photo op with a ton of licensed characters, such as Baghul from Sinister, or the twins from The Shining. It’s a ton of fun to see those characters and get up close and take pictures with them. However, if you’re looking for scares, that’s not really (seemingly) the goal of this zone. I see a lot of discussion online regarding scareactors and scaring vs. taking photos, and I think, as long as I’ve been going to HHN (2003 was my first year), it’s always been a balance of both. This year, the photo opportunity zone is Altars of Horror. 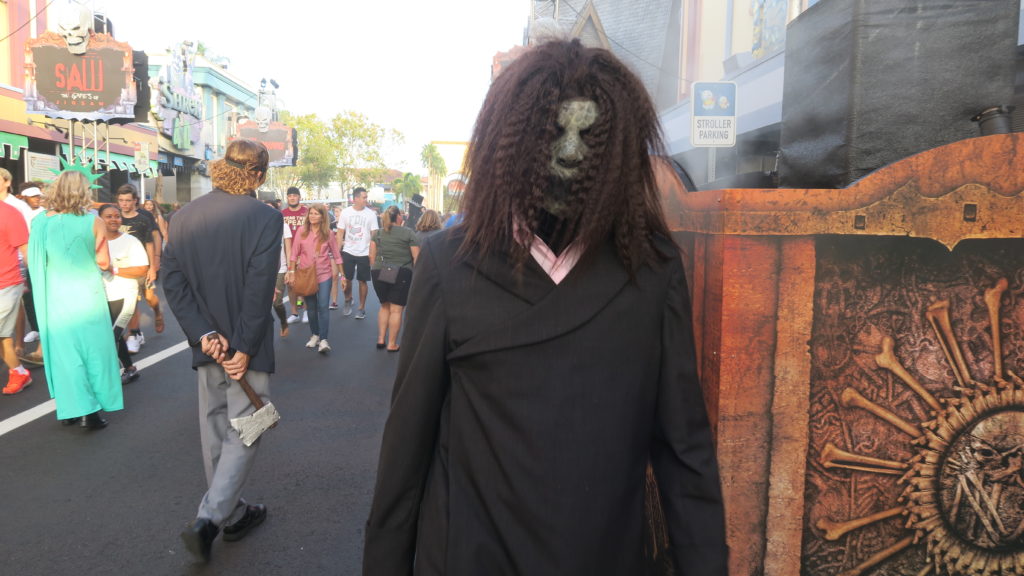 Sadly, due to Hurricane Irma damage, Academy of Villains had an abbreviated 10-minute show (the full show is due to be unveiled either 2nd or 3rd weekend of HHN), so we didn’t get the full experience, but still…AoV has got to be one of the best shows Universal has ever brought to HHN. Even on a small stage and with short prep time (and short show time), AoV manages to impress in a dazzling dance show that genuinely has to be seen. Maybe multiple times. 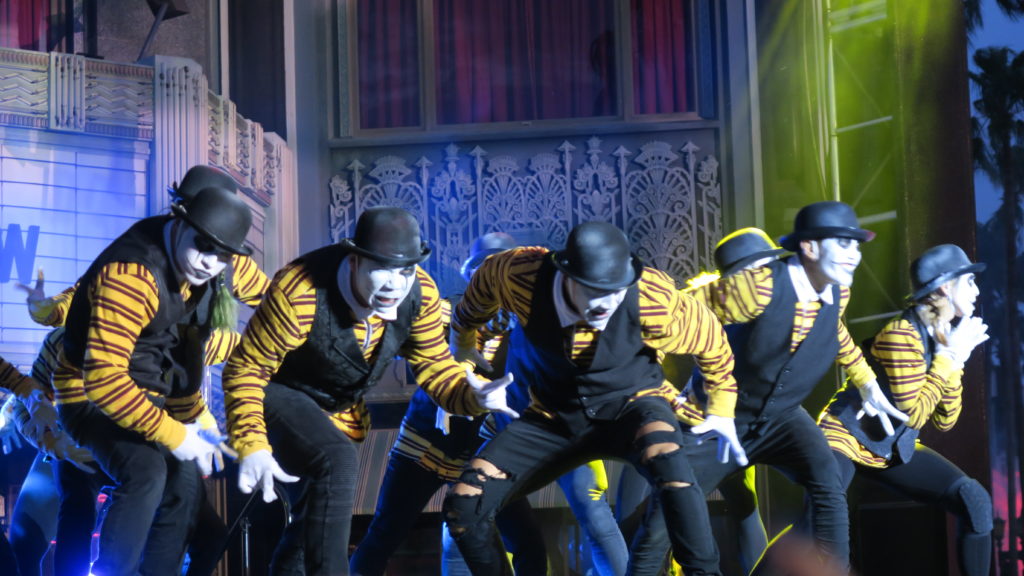 After not loving Bill and Ted’s Excellent Halloween Adventure these last couple of years, I have to admit that this year’s swan song, while not perfect, is a great ender. Not every joke lands, but there is a genuine emotion to how it wraps up that makes you sorry to see it go. Definitely worth catching.

After last year’s great experience with Scareactor Dining, I was worried about how this year would go without Chance. Replaced as a the “host” of the experience with Igor, this year’s Scareactor Dining brings in characters from every scarezone and a chance (heh) to take some one-on-one pics with Sam from Trick r’ Treat. The food was pretty uniformly great (though I do still wish they’d theme the food a bit more to the event) and you won’t leave hungry.

This year’s Halloween Horror Nights event will go down as one that persevered despite the odds being against it – no icon, hurricane damage, etc. Houses like Dead Waters and Scarecrow will go down as some of the best ever, while The Shining (after last year’s Exorcist) shows that Universal Creative can genuinely do something creative and awesome with a property that wouldn’t easily lend itself to a house. Trick R Treat brings iconic Halloween imagery back to the event, and Academy of Villains continues what will, hopefully, be a nice, long run with the event.

To purchase tickets and for more information, visit www.HalloweenHorrorNights.com.

Thanks to Universal Orlando Resort for having us out for the media event.