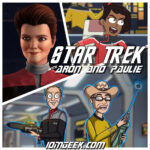 Paul and Aron have returned from the Genesis Planet, climbed Mount Saleya and had their katras reinstalled just in time for STAR TREK Discovery Season 4. This week: